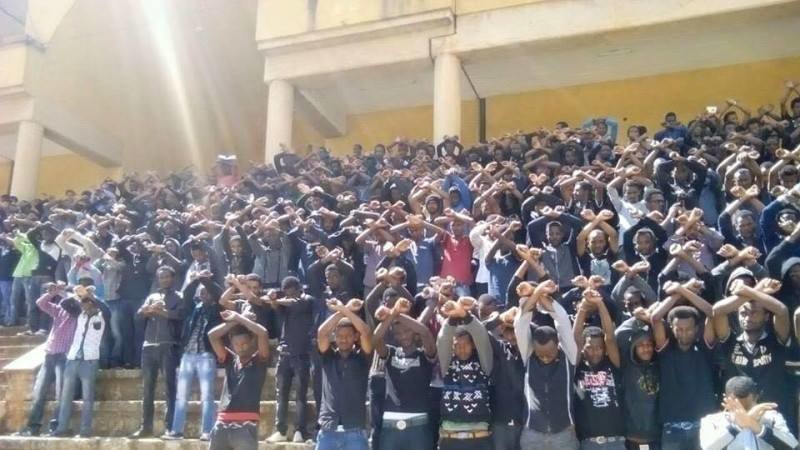 The current round of peaceful protest was started by elementary and high school students in a small district called Ginchi on November 12, 2015. Since then, it has spread to other elementary schools, high schools and universities across the State of Oromia. Parents, farmers, factory workers, medical professionals and merchants have since joined the students.

Armed forces are firing live ammunition against unarmed people, killing and maiming them. Children as young as 8 year olds are among the murdered. Over 65 people have been killed so far and the number of casualties is rising. Thousands are being mercilessly beaten and herded into prisons. Armed forces are raiding university dormitories, savagely raping girls and killing unarmed students. This deplorable carnage is continuing as I write. As a human being with a passion for human rights and justice, I cannot stand by and watch this in silence.

The current protests are triggered by the so-called Master Plan. However, the Master Plan is only the last straw that is breaking the camel’s back. The chronic problem in Ethiopia is much broader and deeper; it is the ongoing question of identity, fundamental human rights and justice. And this is exacerbated by the ugliest face of the current global land rush that found arable land in Ethiopia and a government willing to forcefully evict its own people from their land. Indeed, millions have been evicted and left in complete dispossession and destitution with nowhere to go. Sometimes their homes were bulldozed with little notice and hardworking people are reduced to beggars. Patient people are pushed to the end of their patience. We hear this in their desperate haunting cries: “Where shall we go? We were born here; we grew up here; we knew ourselves here; we bore our children here; where shall we go? Where shall we go?”

Human rights organizations like Amnesty International and Human Rights Watch are reporting these atrocities. Some media like The Guardian and Deutsche Welle are also beginning to report. Although Oromo media networks and some Ethiopian media are replete with news of the protests and graphic images of the carnage, major mainstream media have yet to carry these atrocities. I have provided links to these resources for your perusal at the end of this letter.

Although Oromos are taking the brunt of this atrocity, other nations and nationalities are also suffering similarly. Ethiopia is a multinational country of close to 100 million people where the vast majority suffers under the totalitarian repression of a single-party dominated by the elite of a minority ethnic group. This repressive minority regime has used iron fist over the last 25 years to entrench itself. In its extreme greed and lust for power, it has created a tight and absolute control over the country’s politics, economy, military, and media.

This regime has announced a 100% win in the May 2015 election, thus leaving 0% of space for any political dissent. In the name of development, it has forcefully evicted millions, leaving them in complete dispossession, landlessness and homelessness. It has left millions in starvation. It has burnt down prisons and unleashed its exclusive armed forces to crush any opposition, including peaceful student protests. To ensure that none of these atrocities get to the outside world, it has stifled independent media, leaving many critical journalists and bloggers languishing in prisons.

The people of Ethiopia are renowned for their strong forbearance and unlimited patience. But there is only so much people can take and even these patient people seem to have run out of patience now. They are at the end of their wits. These law-abiding people are confronted by a totalitarian regime that does not abide by any rule of law, including its own constitution. People are pushed up against the wall where the only way out has become fighting back.

The regime has denied Opposition parties their constitutional right to hold protest rallies. The spontaneous protests that started peacefully a month ago are now being pushed into violence when local police attempted to protect unarmed protestors. As John F. Kennedy said, “those who make peaceful revolution impossible will make violent revolution inevitable.” The Ethiopian government has made any peaceful expression of dissent impossible. Dangerous clouds are hovering over the country.

Often the International Community does not act until situations spin out of control and become too late to reverse. Things are spinning out of control in Ethiopia right now. The Ethiopian government has been committing such atrocities with impunity only because the International Community looks the other way. It is emboldened because western nations have dropped the issues of human rights and social justice from their agenda, because they prioritize security and economy. They hail Ethiopia for good governance, for being an ally against terrorism and for achieving the fastest growing economy in Sub-Saharan Africa.

The current carnage calls for the immediate critical attention of the International Community. Democratic nations need to step back and look at the aftermath of what they promote as good governance. If there is good governance, why are so many millions dispossessed and left in destitution? Why are a staggering 15 million people expected to starve this year? Why are millions from across the country rising up in protest?

Thank you for reading so far. Please follow the links below to see more of the details for yourself.

Amnesty International’s report titled “Because I am Oromo: Sweeping Repression in the Oromia Region of Ethiopia” is at (https://www.amnesty.org/en/documents/afr25/006/2014/en/).

Human Rights Watch report titled “Yet Again, a Bloody Crackdown on Protesters in Ethiopia” is at (https://www.hrw.org/news/2015/12/05/dispatches-yet-again-bloody-crackdown-protesters-ethiopia).

The Guardian’s report titled “Violent clashes in Ethiopia over ‘master plan’ to expand Addis” can be accessed from (http://www.theguardian.com/world/2015/dec/11/ethiopia-protests-master-plan-addis-ababa-students).

The protests are covered in graphic details in Oromo and some Ethiopian media networks which can be accessed from Finfinne Tribune (http://finfinnetribune.com/), Oromia Media Network (https://www.oromiamedia.org/), and Ethiopian Satellite Television (http://ethsat.com/).

Solidarity rallies from the Oromo diaspora across the world can be accessed from Finfinne Tribune at (http://finfinnetribune.com/Gadaa/2015/12/complete-coverage-oromo-diaspora-ask-international-community-to-intervene-as-death-toll-of-oromo-peaceful-proterers-rises-by-the-day/)